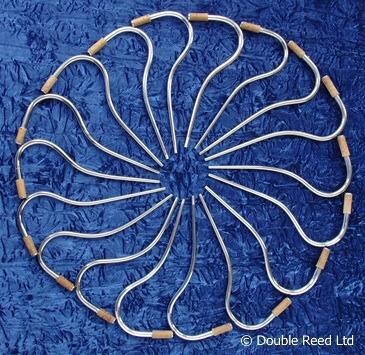 The Bassoon is one of the most intimidating instruments in the band but when you break it down it’s really not that complicated at all!  The first thing to understand about bassoons is at the top of the instrument, the bocal.

Bocals vary in specifications by manufacturer so not all of them are just alike.  One thing that is generally the same is the numbering system.  Bocals differ in length and that difference adjusts the macro intonation of the instrument.  The micro tuning is all done with the embouchure and reed.  The bocal length is generally identified by a number on the side of the bocal.  The higher the number the longer the bocal will be.

Bocals are easily damaged and it can be detrimental to the pitch and playability of the bassoon.  Use extreme care when placing the bocal onto the instrument to avoid ripping the whisper key pad, bending the angle of the bocal, tearing the bocal cork, or even cracking the bocal at the seam.  Bocals can be repaired but sometimes the damage will permanently alter the bocal and a new one should be purchased.

The tip of the bocal is the first acoustical point on the bassoon and it is critical that this area be treated with care.  Be sure to keep the bocal clean and the tip round.  It can be cleaned with a pipe cleaner and a small amount of alcohol.  Also don’t forget to be aware of where the tip is while you are carrying around an assembled bassoon.  It is easy to accidentally hit it on a music stand or door frame!

Take care of your bocal and it will last you a lifetime!